Governed by Whimsy: The Anthology, which contains the first four stories in the Songs of the Amaranthine collection is now available as an audio book. Travis Baldree narrates:

Don’t forget, you can still pre-order Mikoto and the Reaver Village‘s audio edition, which releases next week! ::twinkle::

August 10, 2021 by FORTHRIGHT Categories: Songs of the AmaranthineTags: 01 Marked by Stars, 02 Followed by Thunder, 03 Dragged through Hedgerows, 04 Governed by Whimsy, Anthology, Audio Books Leave a comment

Button Splosion. Another quick nudge (because I really, really should get back to writing) toward the ongoing photo challenge. So many more entries came in this week, and I love your creativity. I’m always delighted when you pose my books with pets, and we’re about even … cats vs. dogs. Will you be entering? Hope so. There’s time! Pretty, pretty prizes (there will be a drawing) were revealed on this post >>

Cameras Ready?! Take pictures for me! This time around, I’m inviting you to send me snapshots of ANY of the books (Saga & Songs). Jumble them together or feature them individually. Prop one up in your favorite reading spot. Snag a book-sniffing selfie. Showcase the latest title with the other books in your set … with props from the story … with your mug of tea … with your pets … with your plushies … with character doodles … with a Kimiko-worthy snack. Get creative. Be enthusiastic. Impress me. Be elegant or silly. Make me smile. Because there will be fabulous prizes.

If you’re taking part, I’m going to assume you’re okay with my re-posting your pictures here on the blog, on Twitter, on Goodreads, etc. And yes, if you can find creative ways to show off your digital edition, I’ll count those pictures, too.

Fabulous Prizes. Everyone who participates (and lets me know w/ a comment or email and link) will be entered into a drawing. Four people will be selected by ye olde randomizer. Multiple pictures are welcome (encouraged, even), but they’ll add up to one entry per reader in the prize drawing. I’ll reveal what those fabulous prizes are in a future reminder. ::eyebrow waggle::

Small Changes. It’s hidden in plain sight, but it’s sorta swag. With every book release, we’ve updated the shipping labels I use, changing the color of little 4thy’s socks & the book cover. Because details matter (at least to me). ::twinkle::

Next batch of books will ship Tuesday if you want to nab a copy.

May 24, 2020May 23, 2020 by FORTHRIGHT Categories: Songs of the AmaranthineTags: Anthology, Signed Books 1 Comment

Four Stories, Four Stamps. It’s Release Day for Governed by Whimsy: The Anthology, and the first big batch of books have shipped, thanks to Mr. Right, my sometimes shipping clerk. ::twinkle::  Already at work on another pile, so don’t be shy about contacting me with your orders. Details on the Signed Book page >>

As additional enticement, I’m showing off the inked first page. One stamp for each story in the set. They were fun to design, and they came out so pretteh! ::bliss:: (I’ll leave it under a cut in case you’d consider it a spoiler.) END_OF_DOCUMENT_TOKEN_TO_BE_REPLACED

May 22, 2020 by FORTHRIGHT Categories: Songs of the AmaranthineTags: Anthology 2 Comments

Governed by Whimsy: The Anthology includes the first four stories in the Songs of the Amaranthine collection:

Songs of the Amaranthine is a collection of short stories set in Forthright’s Amaranthine universe. Before the Emergence, the clans were nothing more than whispers and mysteries and legends and lore. But every so often—in out-of-the-way places or shockingly close to home—an unsuspecting person stumbled into a fateful encounter with someone who was decidedly other. An eclectic collection, spanning continents and centuries. Tales of adventure, discovery, friendship, rescue, belonging, and love. Each short story stands alone and can be read in any order.

FAQ – Will there be more of these short stories?
Yes. I have the next set planned. (And by planned, I mean that there’s a vague idea, a clan or two I want to include, and what kind of relationship is involved.) Honestly, I’ll probably keep adding to the collection for as long as there’s interest (that’d by mine & yours). Always digital first. Always in batches of four. Always with the fourth story lending its title to the resulting print anthology.

Hot off the Press. I can’t say for certain if these were hand delivered by heralds, but we just received a stack of boxes from the printer. Governed by Whimsy: The Anthology makes a pretty first impression! 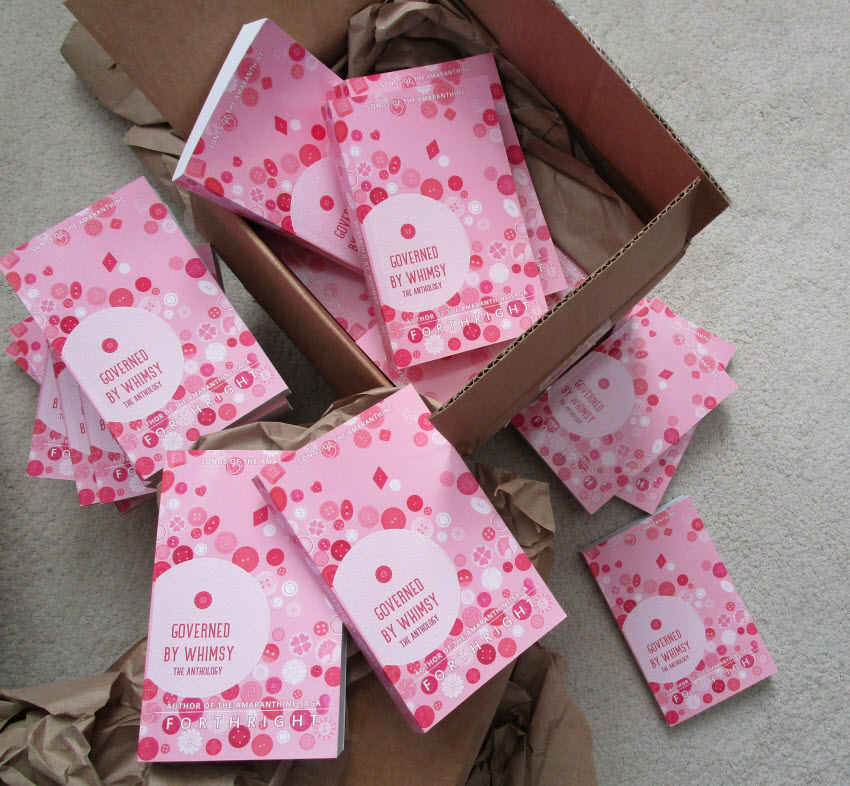 May 20, 2020 by FORTHRIGHT Categories: Songs of the AmaranthineTags: Anthology 3 Comments

Inky Fingers. With each book that’s released in the Amaranthine Saga, we’ve designed a rubber stamp that somehow suits the story. They’re one of those little personal touches that helps make the signed books you order from me extra special. Welp, with Governed by Whimsy: The Anthology about to release, it was finally the Songs’ turn. Naturally, I wanted a unique stamp for each of the four stories. They arrived in yesterday’s mail, and I’ve been testing colors.

More details about ordering a signed book from me >>

Pre-ordered books should ship this weekend.

May 19, 2020May 19, 2020 by FORTHRIGHT Categories: Songs of the AmaranthineTags: 04 Governed by Whimsy, Anthology, Signed Books 1 Comment